May Blog (after Gregg Braden’s From Cell to Soul retreat)

What a month April proved to be. The energetic momentum for change and development came fast and furious. My journey to New Mexico to spend time at Gregg Braden’s very personal and informative retreat was just the beginning. As is usual with such meetings (of minds) the participants are as important as the lecturer. I met so many wonderful souls all with so much to share in the high altitudes a mile above sea level.

About Gregg- from www.greggbraden.com
“New York Times best-selling author Gregg Braden is internationally renowned as a pioneer in bridging science, spirituality and the real world! Following a successful career as a Computer Geologist during the 1970’s energy crisis, he worked as a Senior Liaison with the U.S. Air Force Space Command during the Cold War years of the 1980s.In 1991 he became The FirstTechnical Operations Manager for Cisco Systems. Since 1986 Gregg has explored high mountain villages, remote monasteries, and forgotten texts to merge their timeless secrets with the best science of today. His discoveries have led to 11 award-winning books published in 38 languages. Gregg has received numerous honors for his work including a 2016 nomination for the prestigious Templeton Award.  He’s shared his presentations and trainings with The United Nations, Fortune 500 companies, the U. S. military and is now featured in media specials airing on major networks throughout North and South America, Mexico and Europe.”

I have been researching his research, along with that of many other wise scholars, for at least fifteen years on my own personal journey of seeking answers to life’s questions. Ok, after massive earth shattering grief knocked me off my loving, complacent perch!

I want to say right here that I am NOT INTERESTED in those out dated discussions and redundant arguments about “science versus religion”.

This is not what it is about any more – who cares about your religion, your politics and all those outmoded, associated belief systems? I don’t  -what I do care about is how you feel about yourself, your life and what makes us all tick. I love stepping outside the frame that confines us and jumping off a few metaphorical cliffs. 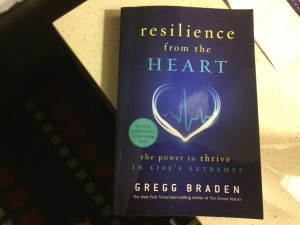 I could write another book about the excellent presentations, but not here and not today. Suffice to say the message that I took away was LOVE – yes I know, same old clichés, but NO  we were shown the measurement tool (ok I HAD to buy one too!) and practised with our own heart energy – way back in 1991 it was discovered that the human heart is full of at least 40000 neuritis – (little brain cells). This was as a result of heart transplant work (ref Armour & Ardell 1994, Oxford) These clever guys discovered that the heart FEELS, REMEMBERS and SENSES independently from the brain. Your heart is clever this has been clearly shown by several heart transplant patients changing their lifestyles and memories to match that of the donor after surgery. 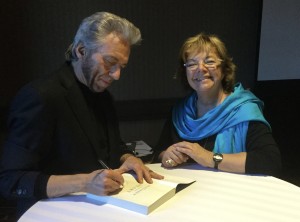 My smug look of  -he’s signing it AND he remembered my Indigo 33 from Phoenix conference last year (“sorry not read it yet” – no surprise I would wait for the Cosmic Condom book  if I were him!!)

I hope you can feel my excitement from these words because I can feel the excitement that I felt in that room of 150 people listening to and experiencing the Heart/Brain Harmony benefits- my hand written notes reflect the energy that I was feeling at the time as the evidence was produced on the slides. Lets face it there is not too much that excites a 68 year old widow these days but knowing that we can trigger more than 1300 chemical reactions including -wait for it  OAPs – anti ageing hormones/immune responses & cardiovascular health ! – will hopefully keep you away from the doctor’s surgery and expensive unnecessary prescription drugs that are crippling the NHS. WE CAN change our existing historical stories, including 150 years of now redundant thinking and our own lives, including our own health with knowledge of the new science of neuro-cardiology.

So those are just a few of the teasers that came up I recommend Gregg’s book that he kindly gave us if you want to do the research or google away to a new life style. I am sure that I will return to reporting the  wisdom gleaned from that interesting 4 days in an ancient landscape in later blogs. 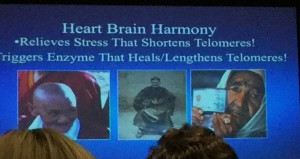 After four fact filled, action packed (if you can call meditative states of self discovery action) days I was re inspired to get on with my work and finish the books in various states of being written. Or so I thought but the Universe had other ideas and I was offered yet another cliff to jump off into – well- into whatever came up with new friends, new clients and many wonderful surprises. Luckily my standby ticket was delayed to fly home from Los Angeles and not  Dallas where I had landed!More next time – but it was a fascinating side trip that inspired me yet again with even more inspirational people to meet. I never thought I would do a Past Life Regression workshop in L.A. …….
Susan Phoenix PhD2017-05-12T23:58:02+01:00